Back to the future

I felt I had been whooshed back to 9 years ago. The insider leaks seemed to be describing Hointer: a retail concept and set of technologies developed by former Amazon exec Nadia Shouraboura. 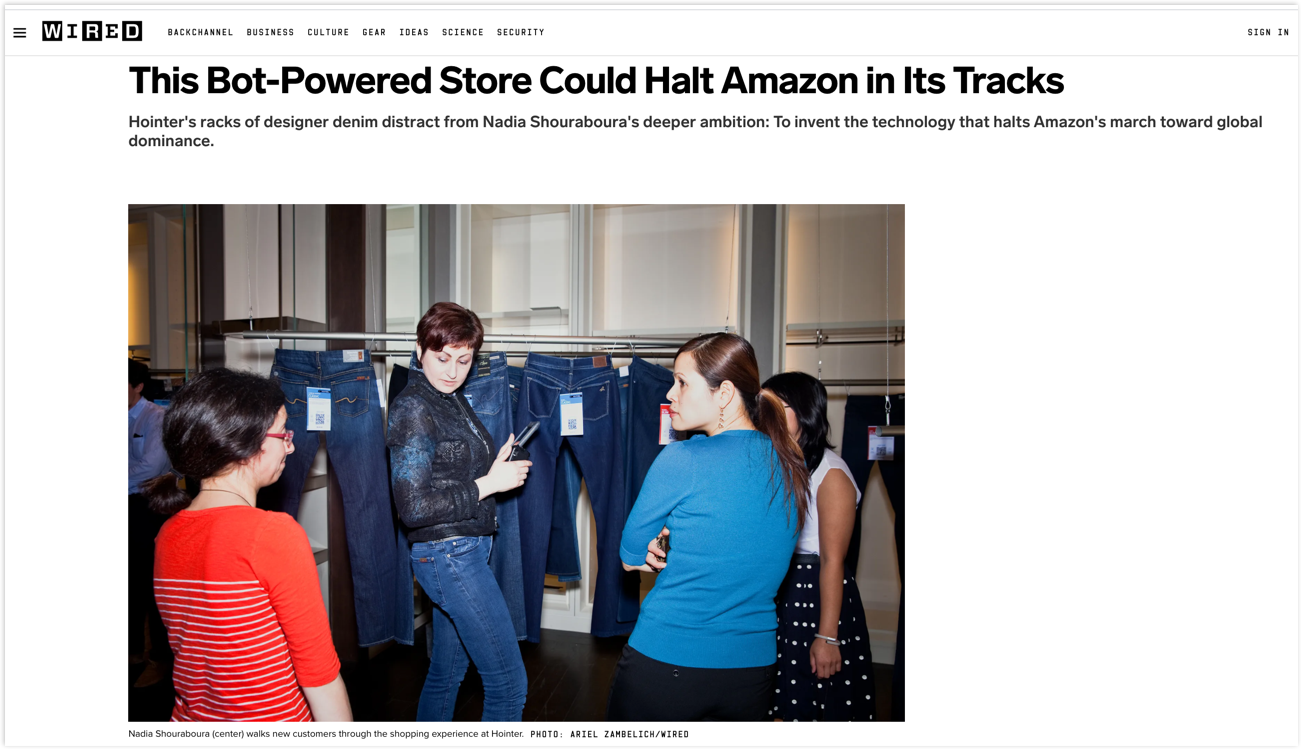 Déjà vu: This Wired article from 2013 describes Shouraboura's bot-powered store design. The inventor, pictured at center above, put $5 million of her own funds into the project.

The Hointer experience was trialed in pilot stores, including a men's store in Seattle's U district.

Shoppers could use her proprietary app to capture QR codes and view matching items. Tap the app and the items were automatically sent to a high-tech dressing room. Need a different size? Tap the touch screen in the fitting room and the clothing item would instantly appear before you, thanks to micro-robotics. No running after the salesperson or going in-and-out of the dressing room to hunt down what you needed.

Tap another button and have a knowledgeable stylist come to consult with you on a different look. Or consult the app to get recommendations.

And forget the checkout line. You paid on your way out with a wave of your phone.

Hointer's beta stores functioned as testbeds and proof-of-concept. So it's not surprising that they were used to attract retailers like Macy's who wanted to deploy and test the tech in their own stores.

Shouraboura's vision evolved from apps to a wand-like device which customers could use to select merchandise to be sent to a fitting room. Users enjoyed the evocation of magic that the wand provided.

Interestingly, her model, a problem-solving fusion of the tactile and digital, would limit face-to-face interaction in today's pandemic-aware world.

The early Hointer vision was captured in this charming video that Shouraboura filmed with her engineer daughter and business partner Caroline:

Let's go back to the Wall St. Journal article, which provides details leaked by the insiders:

Once there [in the fitting room], customers could ask for more items using a touch screen, which might be capable of recommending additional clothing based on the pieces shoppers liked.

The online shopping company has made an effort to keep its clothing concept secret, giving it a code name.

I know the code name: "Shouraboura!" Or maybe "Mayday!" (That's a joke Shouraboura would appreciate.)

Seriously, the leakers aren't describing anything fundamentally different than Hointer, so they may as well have code-named the project "Shouraboura."

Bricks account for 84% of retail sales in the U.S.

There are some odd, pedestrian details included in the leak. After customers scan QR codes, "associates in the store" will "gather the items and place them in fitting rooms." Come on. Salespeople hand-carrying garments to fitting rooms has been done since when — the 1800s? Amazon's not going to do that. They'll likely copy Shouraboura's automated delivery system.

The plans aren’t completed and could change, they said.

Is Shouraboura is involved in this project? Perhaps Amazon bought her intellectual property and tech.

If not, maybe they should consider it.

It'll be interesting to see what comes of Amazon's new experiments.

One thing's for sure: everything described in the article was in place a decade ago. So we'll have to wait to hear what's truly innovative about Amazon's plan.

This Bot-Powered Store Could Halt Amazon in Its Tracks

Hointer: How a mathematician got micro-robots to sell you jeans

Fear of fitting rooms: Tech to find your inner shopaholic